I first read about "candy experiments" a few years ago in a parenting magazine and thought it sounded like a great idea for when Z was older. Then I read the little blurb about the author. Huh. She lives near-ish to me. Neat. Hey. I had a friend in High School who spelled her name that way too... Waitaminnit... The photo even LOOKS like her! ...OMIGOSH! My bestest friend from High School is published in a magazine! How cool is THAT? Squeee!

I creepy-stalkered found her on Facebook and we got to reconnect. I got to follow along on her blog as her Candy Experiments have taken off worldwide! I love the idea of experimenting with your candy. After holidays and birthday parties, I feel squicky about just fobbing off the stuff we won't eat onto some other kid. And your kids get to learn a little about science along the way! Win-win!


The Colors in Your Candy

When Kendra wrote about going dye-free, she wondered what she was going to do with all her leftover candy.  At www.candyexperiments.com, we don’t ask questions like that.  We just start throwing the candy in water. Or in the oven.  Or smashing it. Or freezing it.  Or, in an experiment especially interesting to those avoiding dye, we test it to see what dyes it’s made of.

Candy comes in a variety of brilliant colors and soft pastels.  Unless the candy is colored by natural food dyes, all of these colors are combinations of the seven FDA-approved FD&C food dyes.  With a simple experiment called chromatography, you can separate the dyes to see what colors got mixed together to make your candy color.  (You can find the instructions for chromatography on www.candyexperiments.com.) This makes for beautiful abstract images, and it’s also useful to help you identify what’s in your food if you’re avoiding certain kinds of dye.
Brown M&M’s 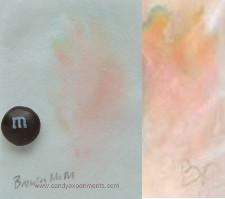 In the movie The Wedding Planner, one character only eats brown M&M’s because he thinks they have less artificial color.  He couldn’t have been more wrong.

Brown M&M’s contain several different food dyes mixed together.  The color separation shows red, orange, yellow, and even blue.  When I do this experiment with children, I tell them they’ve made an M&M rainbow.

When I did this demonstration at the USA Science and Engineering Festival, one mother was appalled to learn that brown M&M’s had red dye.  Since her children were allergic to red dye, she’d told them to eat the brown M&M’s instead of the red ones.  Like the movie character, she didn’t realize what was really in her food.

When I first bought black M&M’s, I was excited to use them for chromatography.  Little did I realize that black isn’t much different from brown.  It’s a mix of all the same colors, if a little more concentrated.  You can see this color spread in color separation done on black jelly beans. 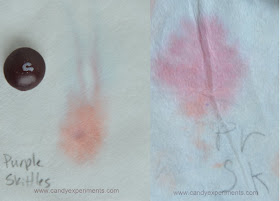 Purple also contains a nice mix of colors.  In these pictures you can see red at the bottom, with a little bit of blue at the top.  (The purple in the middle is probably also made of red and blue dye, but it simply hasn’t separated.)

Even straightforward colors might surprise you.  I thought these red and pink CakeMate hearts would only have one kind of red dye.  Chromatography revealed two colors--red and orange.  In fact, the ingredient label lists three dyes, Red 3, Red 40, and Yellow 6.  (The third dye may have been too faint for us to see (this is common), it might not separate from the other dyes in water, or it may only have been used in the pink candy which we did not test.)


Candy experiments teach us all sorts of things about the foods we like to eat.  Or, in some cases, food we don’t want to eat any more! 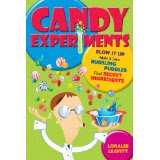 At least one of us remembered something from the chemistry classes we took together! I just remember slipping and falling a lot in badminton. She was a true friend and teamed up with me for doubles competitions, even though I was pretty much the worst player in the history of ever. (My nickname was "The Broom." And not because I "swept" the competition either.)

Go ahead! Tell me how awesome I am. Or ask a question. Whatever.

(Please note that I had to disable Anonymous comments. Too many spam comments coming through the filters.)